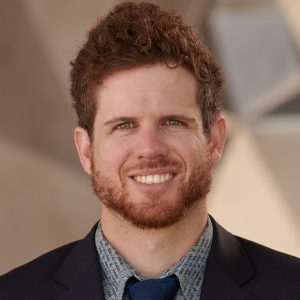 Mikey Kettinger started with Student Media as a volunteer live sound tech and post-production audio editor with Aggie Radio. Then in 2015, he began his show “Underground + Overlooked” which he continues to host every Tuesday at 10pm. With radio experience under his belt, Kettinger later served as the Station manager of Aggie Radio working to help his staff grow and “foster collaborations with the community.”

Traveling really allowed Kettinger’s passion for Aggie Radio to grow, “Interacting with some of the best college radio talent from around the country let me learn that our station had the potential to be the best in the world.”

Along with working for Aggie Radio Kettinger also worked with The Utah Statesman as a photographer. His photos from USU vs USC football game at the Los Angeles Coliseum, and an expedition to Utah’s West Desert (the Republic of Zaqistan) were published.  Today, Kettinger continues his passions of music and art in his day-to-day job, “I am living my California dream in San Diego, where I create art every day, make music, teach art, and work at an art gallery.”

Kettinger fondly looks back at his time with USU thanks to his friends and mentors.

“My advisor Mark Lee Koven recruited me to USU because he believed in my talent, and knowing that he believed in me allowed me to really flourish and become a better educator, leader, artist, and human being.”

Now Kettinger “views USU from afar, but I remain engaged as an enthusiastic alum.” From his outside perspective USU has seemed to become more comfortable in its skin. “I want USU to be unique, and to honor its history while it creates its own traditions. USU is different from BYU and Utah, and that is cool.” Remarking on USU’s uniqueness Kettinger compliments the USU community for embracing who we are, “instead of trying to mold ourselves after other universities. Lead instead of following.”

Kettinger leaves one piece of advice for alumni and students alike. To support all aspects of your college and through that support gratitude will come.

“I have always encouraged people to have enthusiasm for all parts of their alma maters, not only the sports teams. Support and Follow your alma mater’s paper, radio station, museums, researches, professors and students who are excelling, and you will have a great sense of gratitude to be an alum. I love football, but a university is much more than that.”