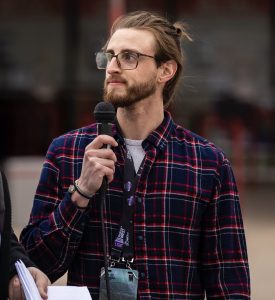 Dalton Renshaw was nominated by Nathan Laursen as October’s student of the month. Currently Dalton is working for his second year with The Utah Statesman. Previously he has been a sports writer but currently he is working as the sports content manager. He is constantly working to organize podcasts and stories for his team of writers, “. . . along with recruiting and putting together training exercises. Often, you can find me emailing with SIDs and coordinating events and interviews.”

Majoring in journalism with an emphasis in public relations, Dalton enjoys telling people’s stories and working in a team, “It took me a while to decide which emphasis I’d like to go into, and that seems pretty common among journalism students with the way the field is constantly changing.”

After college Dalton hopes to work in the sports industry in some capacity, “Ultimately, I’d like to work for a team or school in their PR department. I’m obsessed with soccer and Europe, so working for a club wouldn’t be a bad gig.” His love for sports definitely shows in his free time as Dalton loves to watch sports and go to games, “Besides that, I do enjoy going to concerts and art shows.”

Dalton held up the sports team when he covered the Mountain West championship last spring, “It’s hard to beat spending a week in Las Vegas. . . the chance to work all day and into the night covering basketball, then spending the night and early morning with your colleagues and friends is a pretty cool opportunity.”