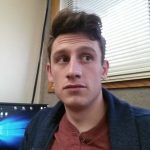 Klaus’ main job is to “help my videographers learn the basics of video production and help them create video content for student media.” He is working on putting together a video team that “consistently produces monthly video content.” The main goal that Klaus for his videographers is to “release engaging videos every single day. Then one day, the video team will be a well oiled machine where we produce commercial/promotional videos, short films and journalistic content.”

Klaus is not from Germany and he does not have a lot of free time outside of school and making videos for Student Media. The moments that Klaus has most enjoyed while working with Student Media are when “Daniel spilled soda everywhere. Or the time I saw Nate.”

When asked why Klaus should be Student of the Month, many people had great things to say.

“Klaus has been with us for only a few months but has impacted student media in enormous ways. His video team has produced more content this year than any video team has in the past few years combined. The management of his team has seen a team develop in skills faster than could be expected. He is an excellent teacher and manager. He is great to have around the office and we are excited to see where his team continues to go. He has created new revenue streams and more publication and publishing avenues. We are incredibly grateful for Klaus.”-Nathan Laursen, Student Media advisor

“He began his position as video manager this fall and has done a great job cultivating the current video team. He incites passion in his videographers to strive for the best work they can create. Klaus recently got married and he and his wife met through Student Media last year after covering the same event together. He is a dedicated and hardworking individual and we are so lucky to have him on the team.”-Matt Halton, Managing Editor for The Utah Statesman.

“A new video presence has taken off at The Utah Statesman. If you haven’t noticed, you’re not paying attention to our content. That change has been a direct result of Klaus VanZanten, who is deservedly the USU Student Media Student of the Month in October. His desire to improve the quality of video content USU Student Media produces can’t be taught. Klaus has a passion for making movies. He is driven and a self-starter with an admirable work ethic. I haven’t ever had to worry about him not completing a task or exceeding my expectations for a project. He takes great pride in what he is involved in and anything associated with his name, whether that is him shooting the video, or overseeing a project.

“We’ve seen a 130% increase in video content published to The Utah Statesman compared to this same time in the school year last year. Not only are we seeing more content, the production value has also increased and our audience has taken notice. We’ve seen a 42% increase in video views on our Facebook page alone.

“In October, the video team launched Aggie Hacks, a hiking series, and more new projects will soon be released including a news segment. His team completed USU Student Media’s first paid advertisement for an on-campus client. The video team has also created promotional videos for Aggie Radio and The Utah Statesman. Aside from driving better numbers, Klaus is an enjoyable person to interact with in the newsroom and is a great teacher. He mentors and shares his knowledge with others rather than keeping it to himself. That improves the overall institutional knowledge of our organization.” -Cimaron Neugebauer, Statesman advisor

After graduating in two years, Klaus plans to do “a little bit of everything, but not too much.” And to give you a taste of his sense of humor, enjoy the picture he submitted below. 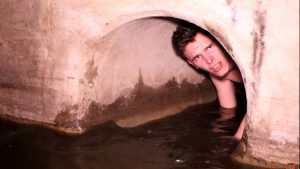