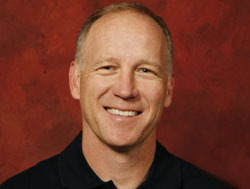 Other than meeting his wife, Somers said that working in the newsroom was the most fun, “The camaraderie was amazing and I learned a lot under Larry Baker, who was the advisor then.”

When visiting this past summer Somers said finding the newspaper’s office was quite a bit of work. After finding the office they “had a great conversation with a few members of the staff.” During their trip at USU they also had to work even harder to find ice cream on campus. The campus has also grown a lot from when they were students, “From new academic buildings to athletic facilities. It’s incredible.” Amongst the differences “the campus remains charming and there is not a more beautiful area in the country.”

After graduating from Utah State University in 1982, Somers worked at small papers before getting a job at Ogden’s The Standard-Examiner. He worked there for about two years before moving to Phoenix, Arizona after marrying Paula in 1985. Somers has been a sportswriter at The Arizona Republic ever since. He started out covering preps, moved to the Arizona State beat, then covered the Cardinals and the NFL for 20 or so years. Last summer, he was promoted to sports columnist.

Paula and Kent have three children Andrew, Logan (yes, that’s how much we liked college), and Chandler. They recently became the grandparents of identical twin girls.