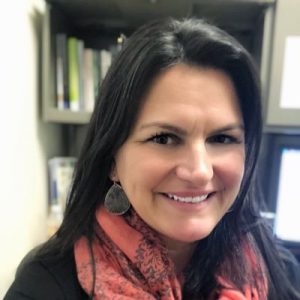 Marcie Young Cancio was involved with Student Media from the fall of 1998 to May 2002 working either as a reporter or editor every semester she was on the Logan Campus. Her freshman year, and first semester at USU, she was hired as a full-time reporter/writer. While sophomore year Marcie was a reporter/writer and copy editor in Maryland as part of the national student exchange. After working for The Diamondback in Maryland, she came back to The Statesman as the assistant features editor in the fall of 2000. That summer she went to the University of Utrecht on a study abroad in The Netherlands. When Marcie came back her senior year she finished her undergraduate degree as the nation and world editor for The Utah Statesman.

Working for The Utah Statesman, Marcie believes, solidified her interest in journalism as a career. Marcie remembers many memories from her time here as she was able to cover many different stories for the paper. Some of these include the 2000 election of George W. Bush, costume design courses, sexual assault on college campuses, local politics, and the 2002 Winter Olympics.

“I was able to cover a wide variety of stories for the paper . . . and did so alongside an exceptional staff of students reporters and editors. We formed strong friendships over countless visits to the Quickstop for caffeine and snacks to fuel late nights in the newsroom and learned from each other as reporters, writers, and editors. The combination of reporting (talking to people and learning/sharing new things on campus!) with the friendships forged make for an unforgettable time and The Statesman.”

Marcie enjoyed her time with Student Media, and is proud to be an Aggie. One thing that has changed at USU since her time here is that, “the JCOM department is no longer perched atop the Animal Sciences building.” But even with the changes Marcie’s favorite thing about being an Aggie is the experiences she gained here.

“USU is a pretty special place. I had exceptional mentors in the JCOM department (thank you, Mike Sweeney and Ted Pease, in particular), who have offered professional guidance and advice ever since graduation. They are a big part of my successes and inspiration, which is so intertwined with my education at USU and as an Aggie. Plus, the peanut butter and jelly Aggie ice cream. That’s a close second.”

Since graduating from Utah State University, Marcie went on to graduate from Columbia University’s Graduate School of Journalism. She has worked from coast to coast from Washington, D.C., New York and North Carolina to California as a newspaper reporter, magazine editor, and digital and television news executive. She’s won several awards including an Emmy for television breaking news. Today, Marcie is an assistant professor of Media Studies and Journalism at Salt Lake Community College and lives in Salt Lake with her husband, Alex, five-year-old son, Leo, and her coonhound, Lola. 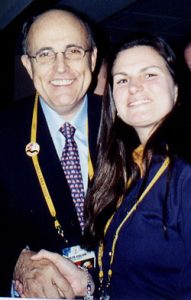 ” I also worked as a media liaison with the host broadcaster during the 2002 Winter Olympics, which took place my last semester at USU. I worked for a full month at the hockey venue with some of the biggest names in national media, professional athletes, and celebrities and politicians attending the Games. I even met Rudy Giuliani, who was then the mayor of NYC. “