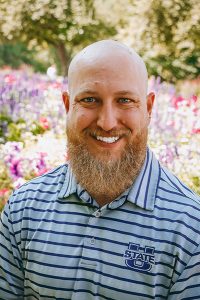 Tim Olsen has been part of the growth and improvement of Student Media in many ways. He was first involved as a student in August 2008 till December 2009 as the Assistant Sports Editor and Sports Editor. Then in 2014 he returned as the adviser of The Utah Statesman until 2017.

“As Sports Editor, I got to cover some of the best Aggie basketball seasons in history. One of my fondest memories was traveling to Boise, Idaho to cover USU in the NCAA Tournament in 2009. The Aggies led for much of the game, but alas, they fell short of upsetting Marquette by a single point. That trip was precluded by an equally epic trip to Reno, Nevada where the Aggies won the WAC tournament championship.”

“Part of the reason those experiences where so memorable, though, were because of the relationship built. I don’t think there’s a group of people I’ve kept in contact with more than the group that I worked with during my 18 months working for the Statesman as a student.”

Tim remembers his time as a student and part of Student Media fondly, so much so that he’s back at Utah State. Currently, Tim works with the Athletics & Campus Rec VP, the HURD Committee, Student Advocate VP, Government Relations Council, USUSA PR & Marketing Director/Office, and the Graduate Studies Senator.

“…It just feels like home and I keep ending up here. I spent a few years as a professional writer and editor, and then had the opportunity to come back and lead the Statesman, which was a college Tim’s dream come true. I learned a lot from my Statesman adviser, Jay Wamsley, and it was an honor to come back and teach students and hopefully have a similar positive impact on at least some of their lives.”

Off campus, Tim is married with four children who are all fans of the Aggies just like their dad.

“I’ve been married to the wonderful Tara Olsen for nearly 11 years and have four wonderful children—Taycee (8), Taylor (6), T.J. (4) and Taytum (2). They also love Utah State, and Taytum even requests the Scotsman as a song at bedtime—complete with actions.”

After receiving his Bachelor’s degree at USU, Tim graduated with a Master of Arts (magazine, newspaper, and online journalism) from S.I. Newhouse School of Public Communications at Syracuse University. He then graduated with his Master’s of Business Administration from the Jon M. Huntsman School of Business at USU.

“I grew up an Aggie, so it’s hard to quantify what my favorite thing is. Probably just the Aggie Community. Other universities are national brands or have huge alumni bases. That is not the case for Utah State, but there still seems to be Aggies everywhere. I love when I travel and see other people in their Aggie gear. You always share that little “head nod” of acknowledgement or a “Go Aggies,” and it’s that community feel—like you’re part of something that not everybody is a part of—that is probably my favorite thing about being an Aggie.”

Since Tim was a part of Student Media, and since he’s come back to USU there has been a lot of change on campus. Tim points out all the new buildings and facilities for Athletics, growth in the journalism department, and The Statesman moving two times, “Also, our football team is winning. That’s definitely changed since I was a student.”

One thing that hasn’t changed is Tim’s pride in being a part of the USU family.

“I love working with all of these students from various backgrounds and see them all come together to make Utah State University what it is—and that’s a great place to be.” 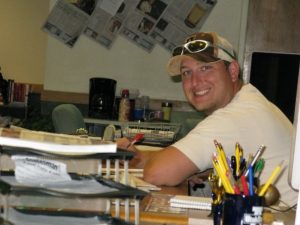 Tim at the Sports desk in the old Statesman office.